The Story of Luke's Entrance into the World: Part Two


In case you missed it, here is the first part of Luke's birth story.

I'll begin where I left off...

Saturday (early, early) morning:
After the balloon fell out, they wanted to give my body some time to see if I would progress without pitocin. They gave me a few hours to see what would happen. So, at 1:30ish am, the nurse came back check me. While she was checking me, my water broke. Ooops. She also told me that I had only dilated to a 7.

I felt a little discouraged by this because my contractions were coming regularly and were pretty strong. They knew that I was trying to labor naturally, so she only started me with a small amount of pitocin to see what that would do.

At about 2:30, my contractions were a heck of a lot stronger and they were doing what they called, "cluster contractions." I would go about 4 minutes without one and then I'd have 2 or 3 right on top of each other.

At this point, I was starting to feel overwhelmed, and it was harder and harder to breath and focus. I was so uncomfortable in the bed plus the combination of the pitocin and my water breaking really intensified the pain and pressure. In my birth plan, I had decided that if I was induced and got pitocin, then I would consider an epidural. I didn't want a natural birth because I wanted to be super woman; I wanted a natural birth because I wanted to be aware and participate in the whole experience. By now, the pain was just running over and over me and I was not aware of much of anything. I was starting to feel a little panicky. Even though I was trying to work through it, my body was also starting to really tense up and shake.

I did struggle a bit with this decision, but in the end, I knew my limit. I asked for the epidural at around 3:30 and got it around 4. One of my fears about getting an epidural was feeling too numb and not having any control, but thankfully, the guy did a great job. I could feel a little pressure when I was having a contraction and could somewhat move my legs--exactly enough to help me not feel claustrophobic or paralyzed.

Even though I was nervous about the epidural, it did feel pretty darn good :) I could also get a little sleep before it was time to push.

The next time they checked me I had completely dilated, but baby wasn't far enough down for me to push. So, we waited another hour or so for him to come on down.

At around 8:30 another doctor came to see me. She was actually my original doctor (that I had to switch because of insurance reasons) so I was so thankful that she was on call since my other doctor was out of town. She was a little concerned at some the bigger dips she was seeing in the little one's heart rate and told me that she'd like me to push to see if I could push him down a bit. I could tell that she wanted him out--and soon.

It was just Josh, me, the doctor, and one nurse in the room. I pushed for about ten minutes--and he started to move on down. His little heart was dipping pretty low at this point so she put the heart monitor onto his head to have a more accurate reading.

All of a sudden, we went from having four people in the room to about fifteen. Since his heart rate was going dangerously low during a contraction, I knew that I had to push as hard as I could to get him out otherwise a c-section would have probably been needed.

My doctor pulled, used the vacuum, and he was whisked (rather yanked) out at 9:12 on Saturday morning. I remember thinking that if I had felt all that my doctor did (she needed to get him out fast), I probably would have been pretty traumatized! Since she didn't have time for an episiotomy, I ended up with a 3rd degree tear (which is not fun!). 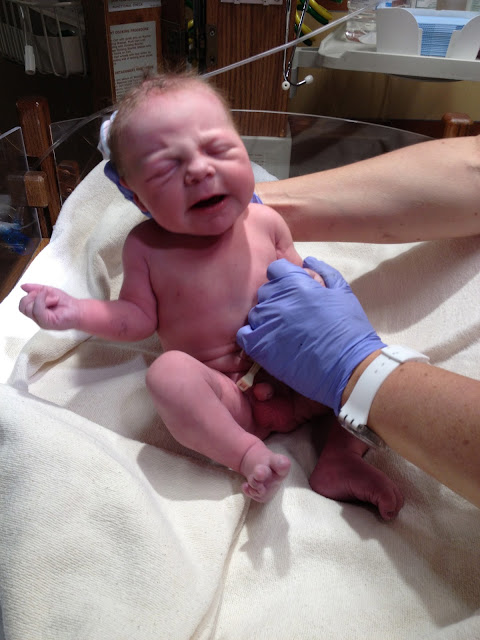 They put him on my chest for a bit and then took him to get cleaned up. Josh also got to hold him, and it was absolutely amazing to watch him hold his son for the first time. 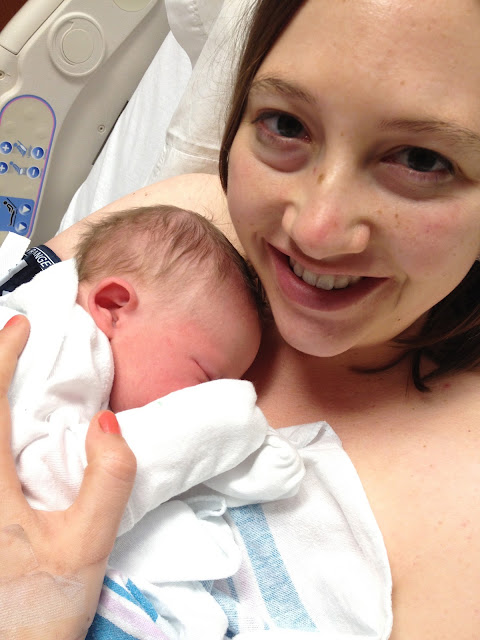 Honestly, I don't clearly remember much about what happened after that. I just stared at that little face and tried to grasp that this little guy was the one growing inside of me all that time. I stared at his sweet pouty lips and thought that he was so cute. I remember thinking that I was so glad that he was cute! 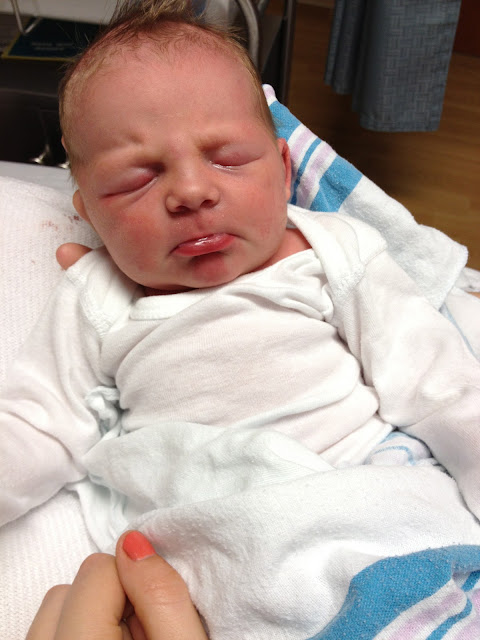 When I think back on it, it seems so surreal. So unreal.

Now, I sit here and stare at my son who is 4 weeks old and feel like he showed up just yesterday.

Like I said in the first post, my experience wasn't everything I had wanted or planned, but it didn't make Luke's birth disappointing or full of regret. I'm so thankful for it and don't regret my decisions. I had wise doctors, wonderful (actually really incredible nurses), and a supportive and encouraging husband. 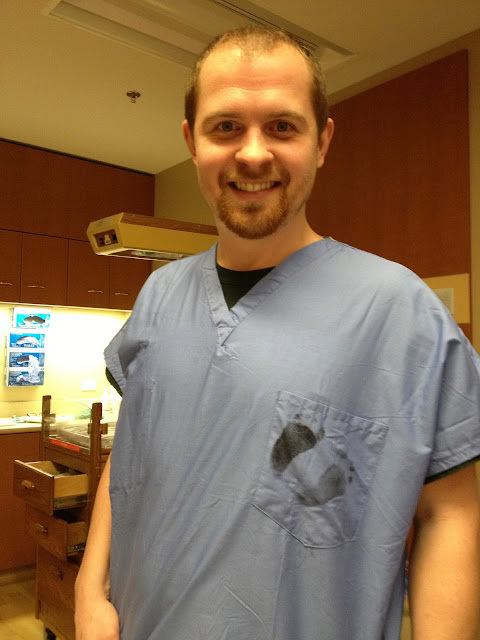 This is most definitely the abridged version (since I didn't talk about how Josh almost passed out while I was getting the epidural ;) and much more...) since I wanted to simply write out the skeletons of Luke's story. When I read this story, I will remember the other bits of memories and feelings--like the sound of his first cry or the feeling of his tuft of soft, brown hair again my cheek for the first time.

Even though it wasn't perfect or my "ideal," it was absolutely beautiful.