Flying with the Little One

Before our trip, the one thing I was the most concerned about was traveling with Luke on my own since Josh was flying in a few days later. 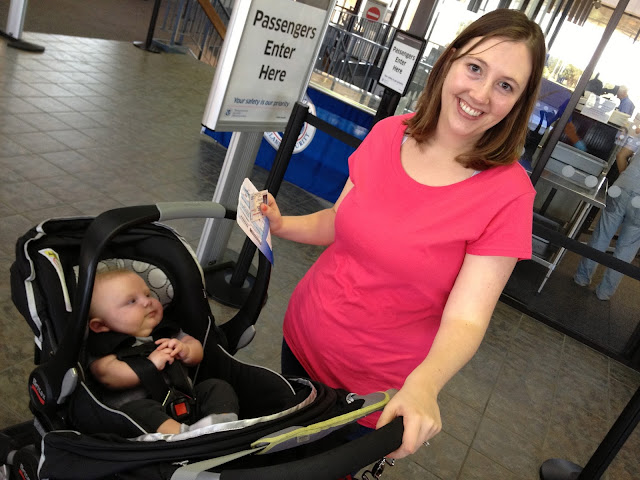 (Luke is thinking of ways to make our trip extra fun!)

I did a lot of asking questions and found (like most things about having babies) that everyone did things a little differently.

Some wear their babies. Other use a stroller. Some nurse while the plane takes off. Others don't.

Still, I wanted to share a little bit about what helped make our trip smooth and what didn't work. Here are some questions that helped us decide how to approach traveling with him and how we did it.

1. Does your baby prefer to be worn or are they fine in their carseat/sitting in a stroller?
For us, this was an important question to ask to see what would be the best way to lug Luke around at the airport. Since Luke isn't a huge fan of being worn right now (even though I try...) and we only own a Moby wrap (which is hard to wear for a long time since Luke is so big!), we decided to go with the carseat/stroller combo. Luke actually does really well in his carseat, so it worked perfectly. We have this one, so it was so easy to snap up and check-in at the gate. But, if baby loves to be worn, I think it would be a great way to manage the airport! 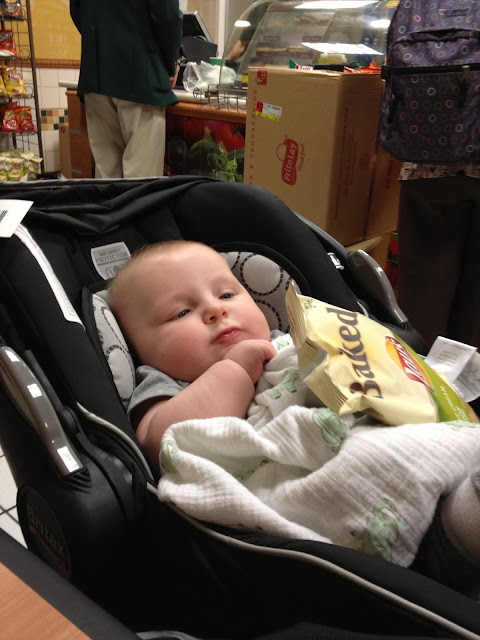 (he went for the baked option)

2. What are the essentials?
Traveling light is always easier than traveling with a lot of gear. On the trip there, I carried way too many items in the diaper bag. So, I went back through for the way home and carried a lot less. For example, I didn't need books, lots of extra clothes (I took like 5 outfits), and my pump. I think this was definitely a live and learn--sometimes you have to take too much (or too little) the first time around to know what the essentials you really need.

3. How does baby eat?
Since I nurse Luke about 90% of the time (he takes a bottle a few times a week), I knew that I would have to nurse while we were traveling. But, I also took a bottle just in case. It was a very good thing I did because nursing was almost impossible on the longest flight we were on. Let's just say that sitting next to a large man, getting squished next to the window, and having the guy in front of me put his seat back was not conducive for nursing (especially when you are modest and you have a kicker). I was very thankful I had a bottle on hand; it was just easier than nursing in that situation. On the way home, I also brought a bottle but ended up not needing it--but I felt a lot better just having it along.

Here are some other tips (that I gleaned from others or just learned as I went) that helped make our trip a little easier for me.

1. Ask for help. I wanted to look "all together," but sometimes I needed a hand. I found that a lot of people are really willing to help!

2. Use family bathrooms. During one particularly "fun" diaper change, it was nice to have a little privacy and also spare others from lots of screaming.

3. Drink coffee/beverages before you go to the airport or at the beginning of a layover. Because, let's face it, you don't want to have to go to the bathroom mid-flight if you are flying solo. I had one delayed flight and wanted a latte soooo bad. But, I resisted because I figured that having to go to the bathroom for an entire flight with a jumping baby was not my idea of a good time.

4. Ask to move to seat with no one sitting next to you (if available). If you nurse, it makes it a whole lot easier. Plus, if you bring your carseat, you can place it on the seat next to you even if you didn't pay for a seat. I was able to get a free seat next to me for for both flights back home, and Luke slept in his carseat the whole way. It was safer for him to be belted in and also gave my arms a break. 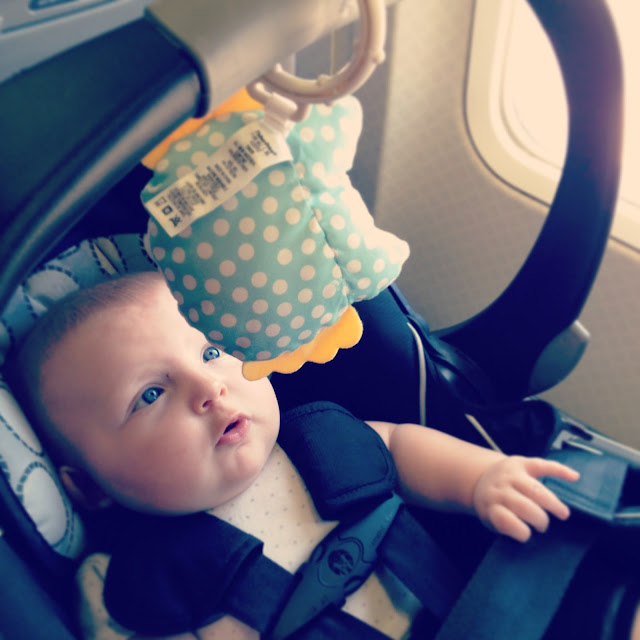 5. If you are breast-feeding and are a little modest about it (read: I hate breastfeeding in public), find a little corner space. It's more private and less people gawk. I found a great spot in the back corner of a little cafe. Also, I found it helpful to wear a comfy shirt that was easy to nurse in.

6. Use a little clutch to hold your personal items in the diaper bag instead of a purse. It was easy to just hang the diaper bag on the stroller and go. I enjoying not lugging around purse and a diaper bag.

What are your travel tips? I'd love to hear them for the next time around :)