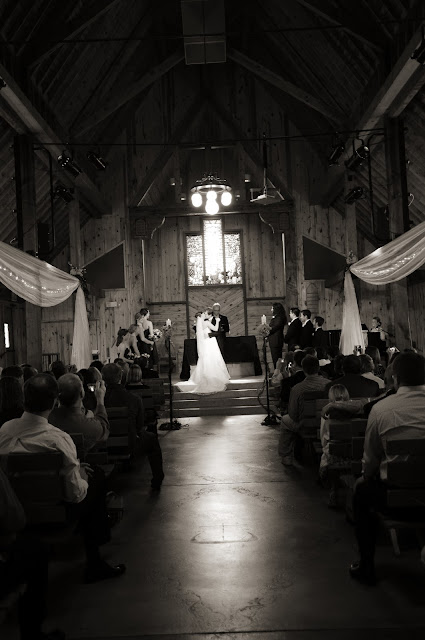 Today, the husband and I are celebrating three years of wedding bliss. Okay, maybe not bliss (by movie standards!)...but definitely three years of sweet love, grace, patience, endurance, learning how to love each other more deeply each day, kisses, quarrels that end by night, and times of laughter and joy!

I realized the other day, that I've never shared how I met Mr. Jennings. So, here's the story in a nutshell (it will probably be an extra large nutshell!):

In May of 2007, I graduated from Liberty University and moved back to Minnesota to find a job and be closer to my family. A few days after I had arrived back and unpacked my bags, I got a call from a mission organization asking if I'd be willing to translate for a church group going to Mexico. Since I didn't start my job for a few weeks, I said "Sure, why not?"

A week later, I landed in El Paso, Tx and met with the team. Guess who was the leader of this group? Yep. The Josh-man. We spent the week in Mexico and loved on darling children in an orphanage. I thought that Josh was nice, sweet, and cute. But, I didn't think that we would ever see each other again. And I wasn't very interested in dating a guy from Texas. Who'd want to live there, anyway!?

Here's our first ever picture of us! 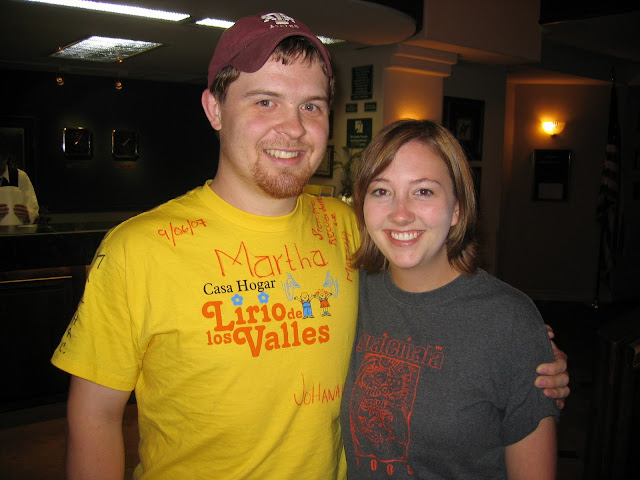 A few weeks after our trip, I got an e-mail from Josh asking me if I'd be willing to help chaperon a group of kids who were going down that August. Surprisingly, it fit my schedule and it was right before I was moving to St.Paul, MN. So, I agreed.

And this is when the fireworks started! Okay, not really :) We would call one another periodically to talk about the trip's plans and usually ended up chatting about life in general. This was when I started to get a little interested in this boy from Texas. Yet, I guarded my heart closely because I had been led on by a few guys during college and realized too late that I had poured a lot of my heart into those relationships.

So, here's where it gets a little interesting! Josh offered everyone the option to ride from Dallas, Tx to Chihuahua, Mexico on a bus.

I was the only taker. I couldn't afford a plane ticket to Mexico and either could he. So, there I was--getting on a bus with a guy that I barely knew! 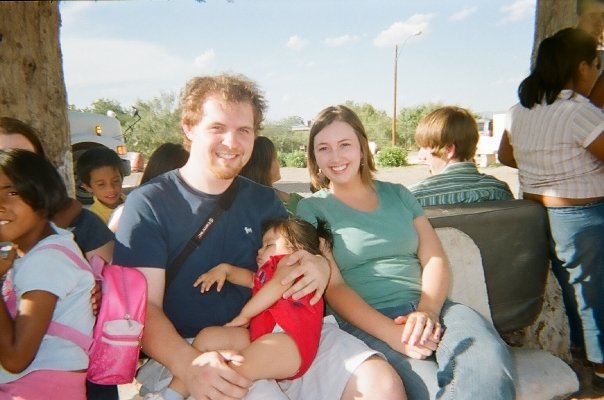 It was 18 hours. There. And back. On the way there, the conversation was light and fun. Although there were little sparks flying around during that week in Mexico, we didn't act on them until we were on our way home. It was then that our conversation became deeper, and he offered his shoulder. By the time we arrived in Dallas, he was holding my hand! I was reeling a bit--I felt excited because I liked this guy and scared silly because I didn't want it to just be another fling. I was afraid he'd call me up the next week and say, "Nicole, I like you. You're cute. But you know, I don't know what I was thinking when I held your hand. I can't date you. Bye." I was scared of rejection.

Josh knew this, so he approached the relationship carefully. The first few months of our relationship were filled with weekly phone calls and letters; we simply talked and got to know one another!

In December, he met my family, and we realized that this was not a fling. It was the real thing! 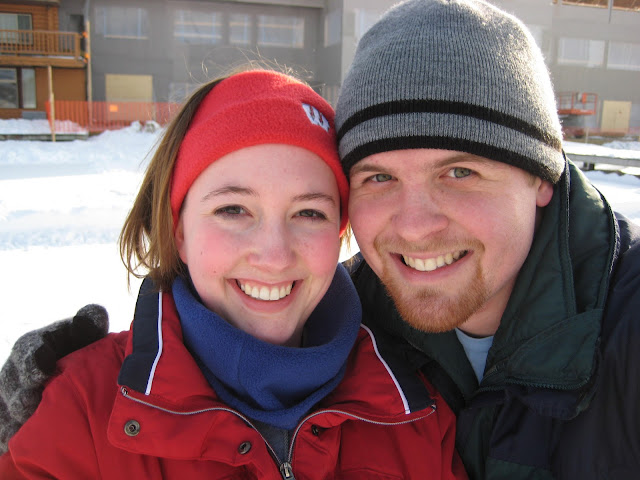 In February, he flew to Minnesota and surprised me on Valentine's Day. 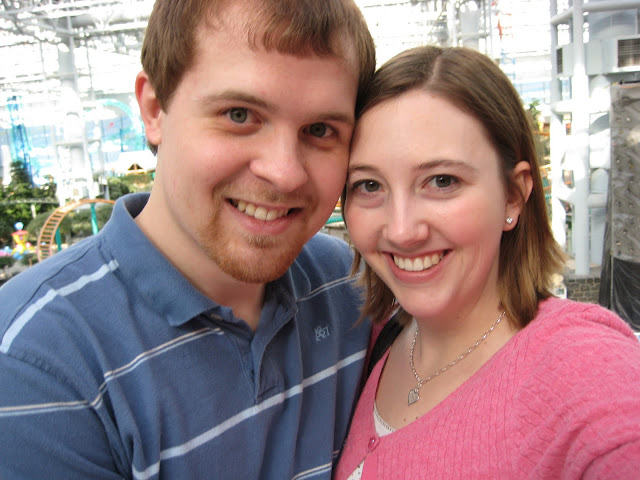 By May, we were engaged. 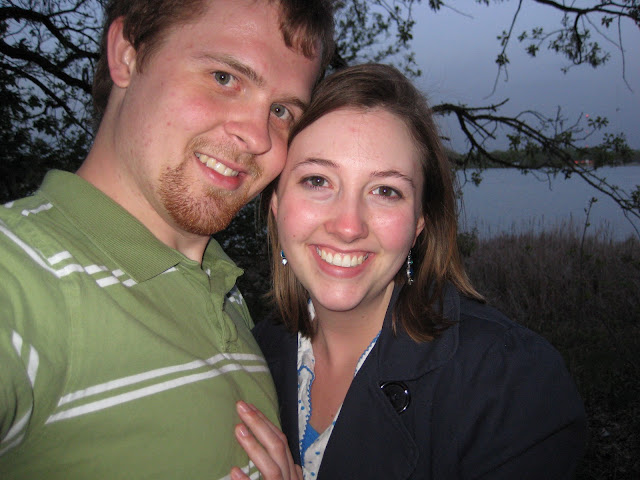 In October, we were married. 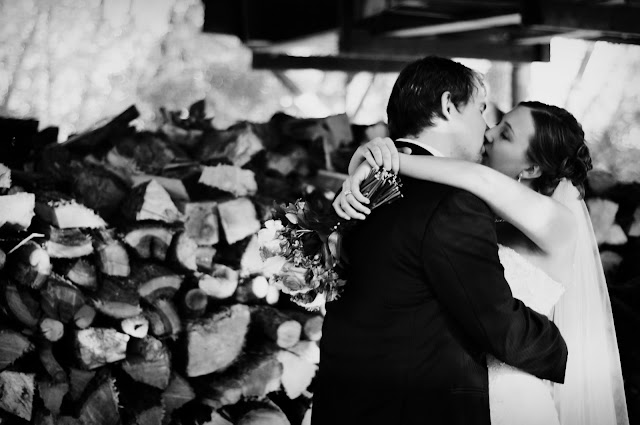 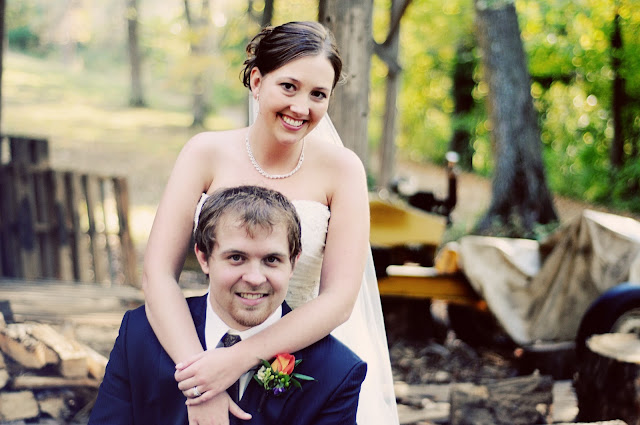 It was a bit of a whirlwind relationship. Yet, I never felt that we were going too fast! Josh was the man that I wanted in a husband. He was loving, kind, gentle, sweet, mind-mannered, and patient with me. And believe me, I need someone who is patient! Josh quietly led us with intentionality and purpose. He led us in a relationship that was build on much more than love letters and kisses at red lights; we built our love with the grace and sweetness that Jesus offers to us.

Our marriage is far from perfect, but it is full and good! I'm so thankful that three years ago, I married Mr. Jennings and have the privilege of being his wife! 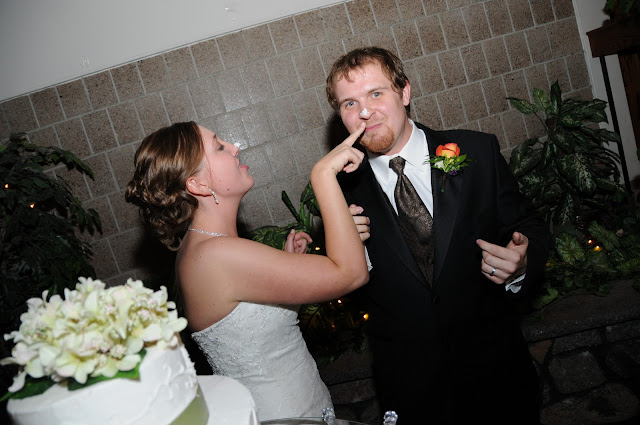