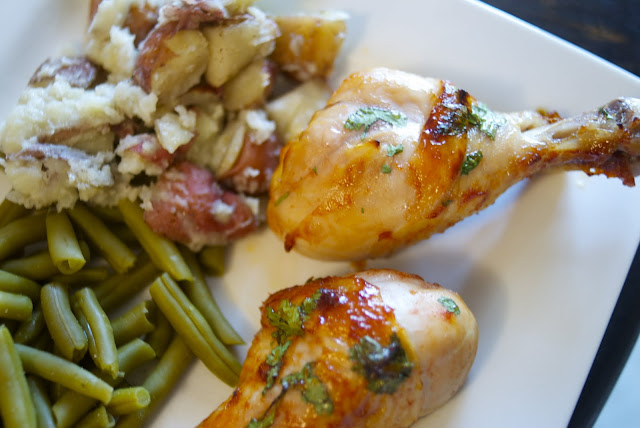 While channeling my inner Pioneer Woman, I whipped up this recipe for BBQ marinaded and honey and cilantro basted chicken legs.

I'm trying to branch out a bit and try to make up up some of my own recipes and see what happens. I was delighted when this recipe actually turned out as finger-lickin' good as I had hoped and won rave reviews from the husband! It's fun to experiment (although many of my experiments have not been very good!) :)

Directions:
Whip up the marinade (if you have some other BBQ marinade on hand, it would also work!) and dump it into a plastic bag. Dump the chicken in too (I used 1 lb of chicken legs, but breasts or thighs would also work!).

Let the chicken soak up all the yummy marinade for about 4 or more hours.

Preheat the oven to 400 degrees F. Prep a pan with tin foil and set the chicken legs on the pan. Bake for 15 minutes. While it's baking, whisk up the basting sauce. After 15 minutes, take the sauce and give it some lovin' with the honey, cilantro sauce. Get it on there good! Put the chicken back in for 15 minutes and then broil it for 1 minute before taking it out (times may be different for different cuts of chicken!).

Look at those legs! 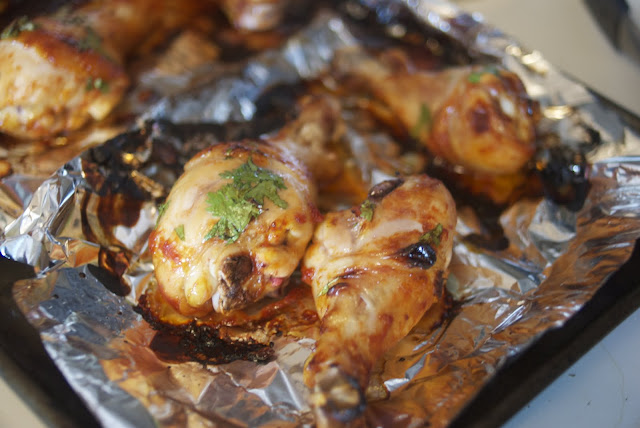