January's theme is JANUARY JUNK PURGE.  Just so you know, I'm not an organized person.  Well, when it comes to making lists and planning meals, I won't argue that I'm a little Type A.  For everything else, I'm a type S (which stands for Stuffs-Things-Into-Random-Places!).  This month is not just about having a place for everything, but it's also about how to keep from being a clutter nutter (what does that even mean!?) and why to take the time to "purge" out your home--especially those areas like closets and under the bathroom sink!
Anyway...
Here's the story! Josh and I moved 3 times between October 2008 and January 2010.  Let's just say that we had a lot of opportunities to purge the junk--you know, the random socks that have a missing partner, weird clothes, that book that you thought you'd read, the purse you picked up at the thrift store but never used, etc...you get the picture!  Moving is a huge motivator for clearing out stuff!
But now since we've been renting our current place for over a year, the stuff has been piling up into a a genuine closet monster!  It is time to face the closets--those holes in the wall that are scary places due to my Type S personality!

In honor of my decision (and desire to have accountability) about purging out the junk, I decided to have the month of January be about "the purge." At the end of the month, I hope to see what you all have been organizing, purging, and cleaning up.  Or, I'd love to see some creative ways that you've organized or things you use to keep things in their place!  Plus, it doesn't have to be a project that you completed this month, you can link up a closet makeover (or anything else that fits the bill)  from months ago...(we won't judge you!).

Are you ready to see what I want to organize? 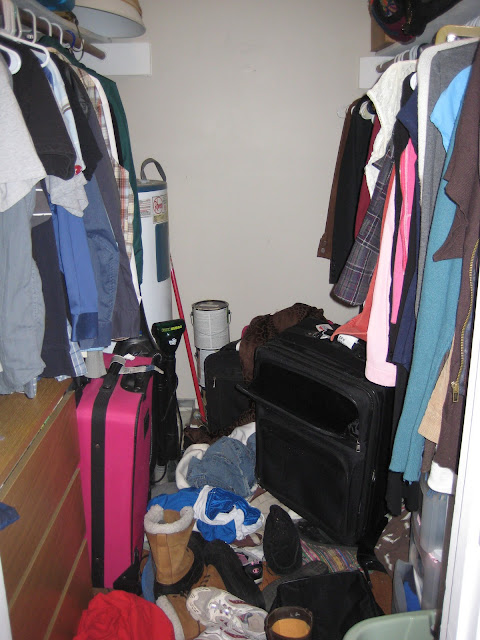 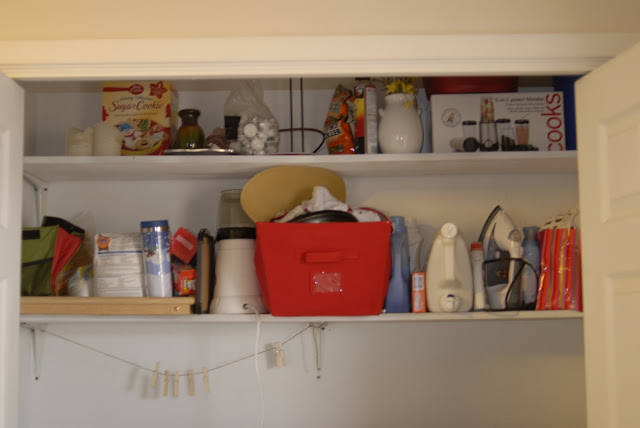 I also have plans to organize/purge the office, but I can't bear to show you a picture of that room yet!
Here's a few general rules that I have about "purging"
1. When it comes to clothes, if I haven't worn it in 7 or 8 months, time to haul it to Goodwill. Yep, even those jeans that I keep thinking might fit again some day!
2. If I sit and stare at an item (like a purse, for example) and can't think of an occasion where I would use it (I mean, a real occasion!), then it also gets put in the thrift store pile.
3. I always have a garbage near me, and I don't use it with hesitation!
4. If something is worth something, put it in a "save until garage sale" pile or sell it on Craigslist.
5. Find a functional way to use decoration items that I'm not using.  I've got some ideas to share with you later about this.  If you're like me and like to rotate the decor a bit, I think this might help!
6. Find a safe place for sentimental items or repurpose them into something functional!  I have some ideas for this too!
7. Ask myself, am I living simply or am I just holding onto this thing just to have it?
How about you?  I'd love to hear some ideas about how you clear out the clutter and organize!
I hope to have the link up party start on January 23rd.  Remember, there's a giveaway involved!
I have some other (non-purging projects) that I'll be sharing with you soon!
Have a lovely night!
Nicole
ps. sorry for the long-winded post, maybe I need to do some word purging!
Email Post